Skip to content
Home/Uncategorized/If the Death of Hank Aaron Isn’t Enough, What Will It Take To Halt the COVID-19 Vaccine Assault?

If the Death of Hank Aaron Isn’t Enough, What Will It Take To Halt the COVID-19 Vaccine Assault?

If the Death of Hank Aaron Isn’t Enough, What Will It Take To Halt the COVID-19 Vaccine Assault?

The vaccine needle is a deadly weapon, as proven by those who suffer sudden death or near sudden death as a result of being injected. Famous all-time home run slugger, Hank Aaron,  is dead at . He was killed by the COVID-19 vaccine. Apparently, he thought it was his duty to get this, and made a PR show of it or was talked into it. This was only to die in his sleep some 18 days later. The invasive medical procedure must be the cause.

It is not a coincidence; it is from the shot. There can be no other conclusion. The same is true of regional head nurse, Tennessee’s Tiffany Dover. For both of them, though unwittingly, this was truly the pride before the fall, as Aaron actually expressed such pride in ‘getting the vaccine.’ So did Dover, who also apparently suffered sudden death a mere 48 hours or less after the jab.

Both of them were part of Pfizer’s PR campaign for the injection, which clearly failed miserably.

“I was proud to get the COVID-19 vaccine earlier today at Morehouse School of Medicine. I hope you do the same!”

“I’ve been taking vaccines now for 88 years and I haven’t been sick,” Young said. “The truth of it is, Black folk have been living by shots, and just because they did something crazy and murderous and evil back in 1931, we’re still thinking about that. We’ve got to get over that.”

Really, he was proud to get a medical procedure from an injectable drug that is highly experimental and that lead to death and disability in his fellows?

Perhaps. his sudden suspicious loss is for a critical reason: to dissuade the black public he sought to convince against suffering a similar fate.

According to R. F. Kennedy, Jr., and the Children’s Health Defense the “CDC and pro-Covid vaccination advocates are falling all over themselves claiming the death of Aaron had nothing to do with his getting the vaccine. Of course, their claims have no proof at all that the vaccine didn’t contribute to the unexpected death.

Aaron was unaware of the danger. He truly thought he was helping by getting it, not just himself–he had already contracted the disease a year ago–but, rather, the teeming masses of humanity. Said Aaron after being advised to publicly be injected:  “It’s just a small thing that can help zillions of people in this country.” In this respect his a victim, including being assaulted with a deadly device: without full disclosure.

For him it was nearly three weeks before the vaccine killed him. For others it was more drastic, as in the following California case; we reproduce the ABC headline:

Yet, the following headline can be found in a local California news report:

Then, to quote the Daily Mail:

By LUKE KENTON FOR DAILYMAIL.COM

A California resident who tested positive for COVID-19 in late December died last week several hours after receiving a shot of the vaccine, officials have announced.

The individual, who has not been named, reportedly died in Placer County, in the greater Sacramento area, on Thursday.

Now, let us look at the numbers or at least the data that is given and see how the vaccine gambit is holding up. It doesn’t seem to faring too well: 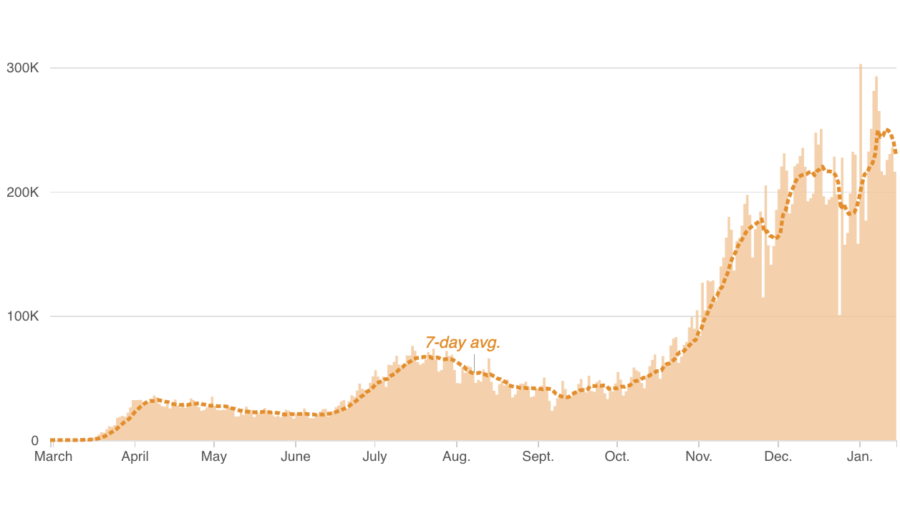 In the Israeli regime vaccines have been heavily imposed. Is it going well?

It doesn’t seem to be going well at all:

It is decidedly worse seen the inoculations were imposed, being Dec. 20, 2020.

According to the reports, “Worryingly, our 7 day average of number of deaths is rising rapidly, so if there isn’t a change in the trend, by next week will be doing worse than almost all other countries.

In a preliminary analysis of 200,000 people older than 60 who received the vaccine, compared with a matched group of 200,000 who did not, researchers found that the chances of testing positive for the virus were 33% lower two weeks after the first injection. It is now known that thousands of individuals who got the vaccine are testing COVID-19 positive and are seemingly contracting the sickness.

Top officials know it is a fraud:

“Israel’s health ministry has moved to row back on comments by the country’s coronavirus tsar, who suggested single doses of the Pfizer Covid-19 vaccine had not given as much protection against the disease as had been hoped.

The remarks by Nachman Ash, reported first in the Israeli media earlier this week, drew widespread attention for appearing to suggest that the vaccine was less effective than expectedafter a single dose had been administered as the country recorded record cases and extended its lockdown earlier this week.

Several elderly Israelis have died from the vaccine, but a massive cover-up has prevented its revelation. It is word-smithing such as the following:

An 88-year-old man died at a Jerusalem hospital Tuesday, hours after receiving the coronavirus vaccine, with doctors stressing in a statement that the patient had serious preexisting health problems.

The man had received the first dose of the Pfizer-BioNTech vaccine during the afternoon as part of Israel’s mass inoculation program. He later collapsed at home.

In the United States there is this from KOTA News:

COVID-19 wasn’t cited as the cause of death for either individual.

State Epidemiologist Joshua Clayton confirmed one person from Pennington County and another from Hutchinson County died after receiving their first doses of the coronavirus vaccine.

One person received who was vaccinated never tested positive for COVID-19 and the other previously had COVID-19 and recovered before getting their shot.

When working with medical providers and coroners involved with the two instances, COVID-19 or the vaccine wasn’t cited as the cause of death for either individual.

Clearly, the cover-up is relentless, as manifested by the following:

Vaccine not the cause of two South Dakota deaths | Covid-19 …

www.bhpioneer.com › covid-19 › vaccine-not-the-cause-…
Jan 16, 2021 — STURGIS — Two South Dakotans have died after receiving their first dose of the COVID-19 vaccine. State officials say the deaths are not …
Just who are these officials? Do they work for Pfizer? How are they tied to this corruption?
In the early 1960s when the polio campaign failed and lead to dozens of diseases, including cancer let alone polio itself, what did the government do? It was said that it was best to keep mum, because the worry was that ‘people would lose confidence’ in government. Is this what is going on now, or is there a more nefarious agenda? The COVID-19 vaccine is being pushed, if not virtually mandated, even it shall mean countless death and much unrelenting chronic disease.
UPDATE: In the island of Gibraltar a disaster has occurred. Some 50 people have died after the introduction of the vaccine. News authors have deemed this a massacre. The vaccine was initiated on January 9, after which nearly 20% of the population was inoculated. It was said from the beginning, people would drop dead from this drug.
Sources:
https://vaccineimpact.com/2021/53-dead-in-gibraltar-in-10-days-after-experimental-pfizer-mrna-covid-injections-started/
jdurham2021-12-29T15:55:12-06:00Jan 24, 2021|